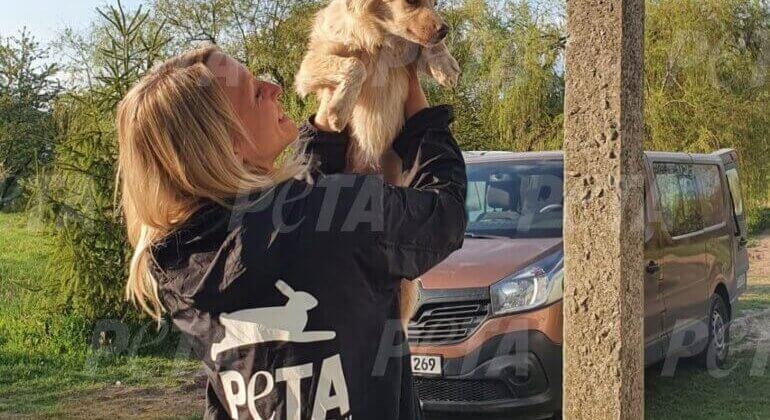 In this yearly round-up, we’ve highlighted some of our top victories for animals in 2022. Watch the video now to see some of the actions that helped create progress, further the animal rights movement, and fight speciesism this year.

In no particular order, here’s a selection of this year’s wins for animals:

We successfully lobbied the UK government to loosen restrictions on Ukrainian refugees fleeing with animal companions and helped fund vital aid for animals affected by the war.

More than 2,000 dogs and cats were rescued, and more than 1,200 tonnes of food and provisions were delivered – mountains were moved to help animals in need.

After more than a decade of intense campaigning by PETA entities, Air France announced it would stop all transport of monkeys to laboratories by June 2023.

Cutting off the supply of animals to laboratories means fewer monkeys will be torn away from their families, shoved into cramped boxes, and shipped around the world to suffer and die in cruel experiments.

1.4 Million People Backed an End to Animal Testing in the EU

After 365 days, the “Save Cruelty Free Cosmetics” European citizens’ initiative (ECI), which called on the European Commission to commit to a Europe without animal testing, closed with a whopping 1,413,383 signatures from 27 countries. What a result!

PETA entities worldwide are incredibly proud of this collaborative achievement and looking forward to the signature validation stage being completed. Watch this space!

In what can only be the start of a new era, the European Chemicals Agency (ECHA) and the European Commission have announced steps to end archaic and painful tests on animals for industrial chemicals.

This long-overdue change is the result of years of campaigning by PETA entities – and it’s heartening that, on the heels of the ECI signed by over 1.4 million EU citizens, ECHA and the Commission are finally taking action for animals who are poisoned, burned, and killed in EU laboratories.

After hearing from PETA, Rushcliffe Borough Council rejected plans for an intensive chicken farm that would have slaughtered almost 1.5 million birds a year.

A horrific rabbit-farm franchise shut up shop after PETA helped blocked applications for new butchering and breeding sites with petitions signed by thousands. Not long after, PETA also helped put a stop to plans for an alpaca farm that would have treated these curious animals as fleece-making machines.

This year has been full of progress for minks locked in cramped, filthy cages. After a huge PETA campaign and lots of local pressure, Italy officially banned fur farming and all remaining fur farms closed in June.

Ireland also said good-bye to fur farming – and Belgium ended the cruel practice before its 2023 deadline.

We jumped for joy when Burberry banned exotic skins after a seven-year campaign by PETA entities. From sharing hard-hitting exposés with company decision-makers to protesting in the streets during fashion weeks to speaking out at annual meetings, we took every opportunity to persuade the brand to stop profiting from reptiles whose necks are hacked open before metal rods are shoved into their heads in order to scramble their brains.

Not one, but three crucial pieces of animal welfare legislation received royal assent and became law this year!

The Animals (Penalty Notices), Glue Traps (Offences), and Animal Welfare (Sentience) acts are helping to improve the lives of animals across the UK.

Cava corks popped at the news that, following appeals from more than 80,000 PETA supporters and other animal activists, cruel, old-fashioned horse-drawn carriages will soon vanish from the city centre of Palma, Mallorca.

Rather than forcing horses to toil for tourists, pulling heavy carts through busy streets under the blazing sun, electric vehicles will be used.

Moncler, Frasers Group, and Dolce & Gabbana became the latest fashion brands to drop fur. We tip our vegan hat to them for recognising that fur is the product of a bloody, violent industry and making the compassionate decision to ban it from their collections.

And That’s Not All …

Each of these achievements was only possible because caring, determined people refused to look away or stay silent while animals suffered. Until every cage is empty, every chain is broken, and every animal is treated with respect, PETA will not stop.

Join us in 2023 – sign up for e-mail updates and we’ll send you urgent petitions and other actions that will help secure even more victories for animals.