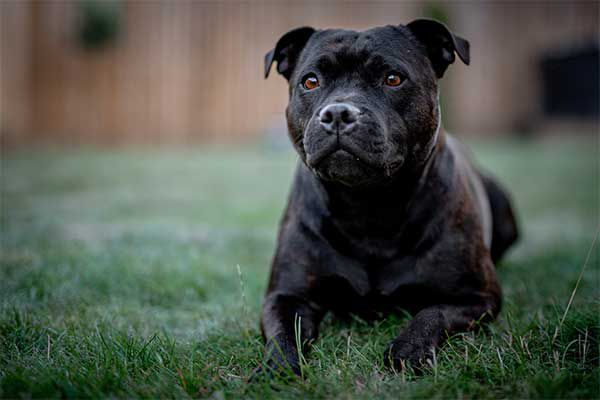 The Staffordshire Bull Terrier can claim a colorful and checkered past, but through it all, his courage has never been questioned. He offers maximum muscle in a medium-sized package. Here are six interesting facts about this devoted breed.

History of the Staffordshire Bull Terrier

The breed originated in the northern regions of Birmingham, England, and in the Black Country of Staffordshire, where he got his name. Dog historians agree that the breed descends from Mastiff-like dogs through the old-fashioned Bulldog which, when crossed with various British terriers, produced the first “Bull and Terriers” in the early 1800s. Those old Bulldogs were taller and longer-legged than the dogs we think of today. They were ferocious creatures used in the “sports” of bear- and bull-baiting as early as the mid-16th century. When these gruesome activities were eventually outlawed, their supporters turned to dog fighting, which was easier to promote in secret. The goal was to produce a sporting dog that retained the courage and ferocity of the Bulldog while adding the grit and agility of the terrier. It is believed that the Manchester Terrier and the now-extinct English White Terrier went into the mix.

Different groups of English enthusiasts favored different looks, but, in time, two distinct types of Bull and Terrier emerged, and were easily recognized by 1900. James Hinks produced a classic white dog by further adding the Pointer and Dalmatian. What we know today as the Bull Terrier (think Spuds Mackenzie) was recognized by the Kennel Club (United Kingdom) and the American Kennel Club at the turn of the century. The “other” Bull and Terrier, a working-class dog owned by the common folk, had a more difficult time finding legitimacy. Admirers of the Staffordshire met in England in 1935 to form a club and create a breed standard, a canine blueprint to help produce a more uniform dog.

When the Staffordshire Bull Terrier came to the US

Shortly before the American Civil War, immigrants from Great Britain brought their Bull-and-Terrier crossbreeds into the United States. They became the ancestral progenitors of the American Staffordshire Terrier, Miniature Bull Terrier, Boston Terrier and the American Pit Bull Terrier. With dogs no longer needing to be bred for blood sport, and the interest growing in dog shows, responsible breeders set out to produce dogs of more stable, trustworthy temperament, affectionate with family, and children in particular. Considered a well-kept secret in the dog world, the Staffordshire Bull Terrier was not recognized by the American Kennel Club until 1975. The first Staffordshire to be registered with the AKC was an English import, Champion Tinkinswood Imperial. The first U.S. champion was a female from Australia, Northwark Becky Sharpe.

How the Staffordshire Bull Terrier got his name

It’s not surprising, given his eclectic history, that the Staffordshire Bull Terrier has been known by a variety of names. Originally, he was the Bull and Terrier and the Brindle Bull. Today, many people shorten Staffordshire Bull Terrier to Stafford or Staffy. You will also see the abbreviation SBT. In addition, to honor his affinity for children, the breed is affectionately known around the world as the “nanny dog.”

The American Kennel Club breed standard sums up the breed’s character so well. Under “Temperament,” we are told, “From the past history of the Staffordshire Bull Terrier, the modern dog draws its character of indomitable courage, high intelligence and tenacity. This, coupled with its affection for its friends, and children in particular, its off-duty quietness and trustworthy stability, makes it a foremost all-purpose dog.” To bring out these qualities in a Staffordshire Bull Terrier puppy, socialization must begin early and continue throughout his life, exposing him to new experiences and teaching him, gently but firmly, what is acceptable behavior. The Stafford, despite his medium size, is incredibly strong, muscular and active. As there are communities around the country that include the SBT in their “Breed-Specific Legislation,” you want your dog to be welcomed as a good canine citizen.

Coat and grooming of the Staffordshire Bull Terrier

Staffords come in a wide variety of colors. Red, fawn, white, black or steel blue are all seen, either as solid colors or with white trim. Any shade of brindle (dark stripes on a lighter background), or brindle with white, is equally acceptable. Black-and-tan or liver are the only disqualifications in the standard.

Whatever color pattern you prefer, grooming is a simple task. The Stafford coat is smooth, short and close to the skin. Shedding is moderate, and regular brushing will cut down on it.

He originated in northern England.

He hails from the northern parts of Birmingham and in the Black Country of Staffordshire.

Yes. Their intelligence and need for mental stimulation make them great at obedience, agility and rally. They need a job or activity; preferably several.

Yes. They are versatile and adaptable.

They can be. They are smart and very strong. They can also be intimidating to some people, due to a lot of bad press about the bully breeds in general. First-time owners should look for a puppy or adult dog that has been well socialized around people, other dogs and cats, and continue that socialization and training for the life of the dog.

They are generally very loving and affectionate, especially around kind children. Introduce other pets with supervision. If adding an adult Stafford to the household, find out if he has been exposed to big and small dogs, as well as cats.

This is a very active, high-energy breed. If you don’t have a yard, find a safe, enclosed area where you can let the dog off leash to catch tennis balls or Frisbees. Plenty of walks on leash are also needed. No Staffordshire, however friendly or well-trained, should be roaming at large.

Trainability level is high. This breed is eager to please.

Barking level is moderate. They do have a protective nature, are vigilant and endlessly curious. If bored, barking will escalate, along with destructive behavior.

No. 75 in the American Kennel Club list of most popular breeds in 2021, based on annual registrations. (There are 200 recognized breeds in all.)